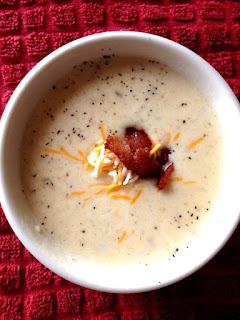 I was thinking about my daddy today and missing him and found myself craving his cream of potato soup.  When I was a child he made this soup with new red potatoes and green onions from his garden.  It was quite a bit of work because he never peeled them, he scraped the skin off, which left the potatoes just a little pink.  He'd fry up some bacon, reserve the bits and then quarter the potatoes and brown them a little in the bacon grease.  He'd add the finely chopped white of green onions and stir those in too before covering it all with water.  Then he'd salt and pepper it before boiling everything.  When the potatoes were very tender, in went some milk.  He would stir in the reserved bacon bits and the chopped green onion tops.  It was never a very thick soup but when I ate it I would mash up the tender potatoes a little and somehow it magically thickened it to the right consistency.  I made my daddy's soup today and it was delicious.  Food can be a time machine.
Post a Comment
Read more

By Jennifer Farley - November 09, 2008
1 pound butter 1 pound sugar 6 eggs 2 tsp pure vanilla extract ½ pint whipping cream ½ tsp baking soda ½ tsp salt 1 tsp baking powder 3 cups all-purpose flour Grease and flour a 10-inch tube pan. In large mixing bowl, cream softened butter and sugar until pale and fluffy. Add eggs 2 at a time and mix until well incorporated. Add vanilla. Sift flour and salt together. Add 1/3 of the flour mixture to the wet ingredients mix lightly. Add 1/3 of the whipping cream to the mixture and alternate another 1/3 of the flour with 1/3 of whipping cream, until all flour and cream is incorporated and batter is smooth. Pour into greased tube pan and place into COLD oven. Bake until a cake tester inserted in the middle comes out clean. (Approximately 1.5 hours) Cool cake, remove from pan and glaze or garnish. Variations: Orange Whipping Cream Pound Cake - Use Orange Extract instead of vanilla and add 1 tablespoon of orange zest to the batter Almond Whipping Cream Pound Cake – Use Almond Ext
6 comments
Read more 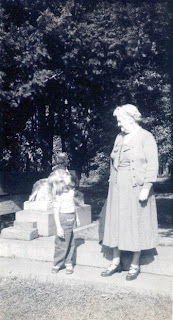 1 dozen eggs As many onion skins as you can find Place all of the eggs and onion skins in a large pot. Cover with water and boil for 15 minutes. Drain and cool. You will have the most beautiful russet-colored eggs for Easter. -- Florence Augusta Siddons Meredith, 1887-1959 Grandma Meredith became ill when I was 8 years old and died when I was 10 years old. I have very few "food" memories of her. However, I do remember us each taking a small mug and filling it with cheerios. Then we would go into her living room and watch "The Lone Ranger" on television. She loved anything involving cowboys and indians. She would also take two pressed-glass wine glasses and fill them with 7-Up. We would drink our "sparkling" drinks like ladies! Grandma Meredith had a kitchen tablecloth with a red Geranium pattern. She also had Geraniums in her kitchen window. She would sit in that window and watch me play on my swing. Geraniums always make me think of her.
1 comment
Read more 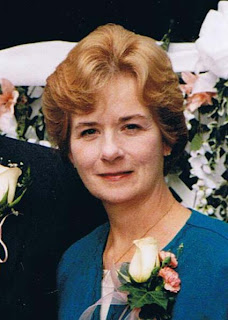 1 cup hot milk 2 tbsp. butter 2 tbsp. flour 1/4 tsp. salt 1/8 tsp. pepper 1/2 cup grated cheddar cheese Scald the milk, about three minutes in the microwave. Make sure it doesn't boil over. Melt the butter in a small bowl in the microwave for about 30 seconds. Add the flour to the butter and stir until completely mixed. Stir the hot milk gradually into the butter-flour mixture until thoroughly mixed. Stir in the grated cheddar cheese until completely mixed. Return bowl to microwave and cook on high, stopping to stir every 30 seconds, until the sauce reaches the desired consistency. -- Meredith Joy Sproul Friedman, 1948-
1 comment
Read more 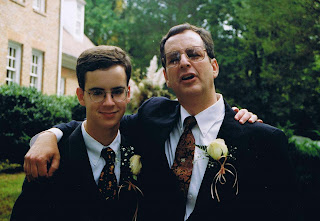 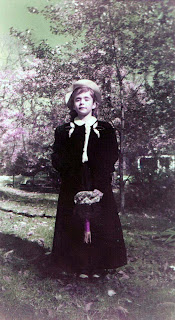 "There was an old man called Patrick McGillicuddy. He was an old crank an awful old fuddy-duddy. He took a skid while chasing a kid, and these are the remains of the old busy-body." 1) Eyes--peeled grapes 2) Hair--rope, unknotted 3) Teeth--corn 4) Leg bone--bone 5) Veins and arteries--macaroni 6) Liver--liver 7) Hand--glove with jello 8) Tongue--oyster -- Florence Jessie Meredith Sproul, "Grandma Sproul," 1914-2004 When I was about 10 years old, in 1958, my mother, Grandma Sproul, had a Halloween party for me and my friends. We lived at 406 Clarendon Place, Orange, NJ. The house had a front to back hallway that was as wide as a room. At the back of the hallway, she had taken my brother Walter's Lincoln Log box and placed it on two saw horses, with Grandpa Sproul's help. Grandpa Meredith had made the box for Walter and it was the size of a small coffin. She arranged chairs, auditorium style, in front of the box. All of the lights were turne
1 comment
Read more